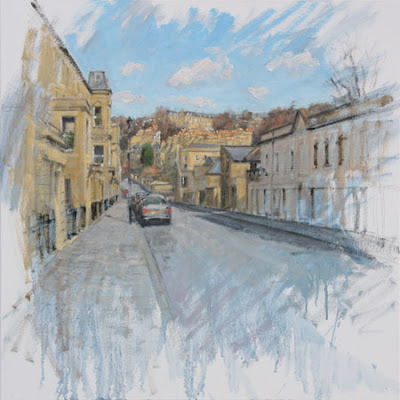 05/03/09
Sombre mood today as I'm going to the funeral of a friend later; someone who died far too young. The whole week has been pretty sobering, although only in a metaphorical way, as I have been drinking far more than usual. Maybe a bit of painting is what I need.
The painting proves difficult - the different lighting and the canvas surface all conspire to make it hard work. It does however seem to be coming together and I really like the clean edges that the canvas gives so I'm hopeful that it will be worth it.
Time marches on and so must I. The painting isn't finished yet and I'm struggling to think of anything to write on it. Today of all days it seems to be totally inappropriate to put some glib humorous comment on and maybe that's a reflection on whether I should write on the paintings at all. Maybe I should dedicate the painting to Melissa. Maybe I shouldn't. I don't know.
Talking of pointless writing: Twitter - what a pile of pants that is - don't know why I started doing it. I set out with the idea of uploading photos of the paintings as they progress straight to Twitter, but it turns out you can't see the image without going through a convoluted link and log in thing - see, total rubbish. Still I Twit anyway.
Melissa was always very enthusiastic about my paintings and she did suggest the writing on the painting thing way back when I did a talk on my work. So maybe it would be fitting. Yeah, okay, decided.
This one's for Melissa.
Posted by Ben Hughes Art at 04:24

Email ThisBlogThis!Share to TwitterShare to FacebookShare to Pinterest
Labels: painting