Last week I went to Bristol, ostensibly to have an all over body massage and a session in a flotation sensory deprivation tank (don't ask*), but while I was there I went to check out some galleries in Clifton.
I was disappointed, nay horrified, at the dearth of said artistic establishments in the posh bit of Bristol. I went in the lone outpost of Innocent Fine Art - I had lunch with the owner ten years ago before I became a painter, but she doesn't recognise me and I don't say anything. This week, back in Bath, I try and redress the balance by walking round a few galleries and it's like a different world with one on every street. Finest of the fine galleries (apart, obviously, from the one that shows my paintings) is Mauger modern art and I find myself INSPIRED by two artists in particular: Nathan James and Guy Denning. I move on to not quite the finest of fine galleries Beaux Art and am similarly excited by the paintings here (not that I like them, but just the use of big old blank space within the pictures). Every so often, you (or I or artist's in general if it applies) need an extra external stimulus to get excited about your (or my or everyone's in general) own work. Surely, all this has got to be leading up to an exciting painting week ...
19/02/09
The issue is the outside bit of the paintings - I like it; all unfinished and a bit pencilly, but it's not working in my usual traditional frames. I spend the morning preparing some canvases as one solution and then I try and rework a painting of the Royal Crescent. It's already been framed, in a gallery window and everything, but it didn't seem to quite work (and obviously didn't sell). I try reworking the edges and the more paint I put on, the more the thing looks unfinished. In the end I cover up all the writing** and almost any trace of white. If I'm going to work with white on the edge it's going to have to be all or nothing as leaving small traces showing through just annoys me. Anyway, judge for yourself: 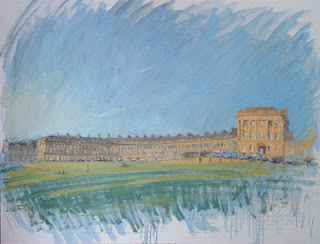 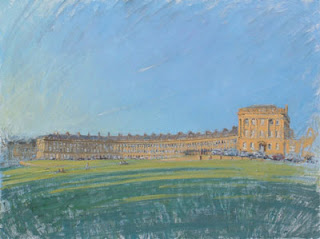 See, still not right. I still prefer the 'before'. More reworking required.
I also mess about with some little one's of venice, again experimenting with how to finish the edges. 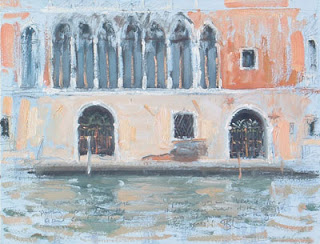 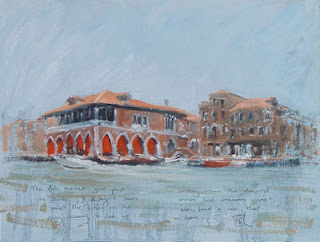 Overall the day does not live up to expectations. Maybe tomorrow.
20/02/09
Damn. The day doesn't start well when I step in dog pooh outside my studio door. The injustice of this is magnified by being inside - it shouldn't be there - how did it get there?
Damn, damn, dammity damn. I'm itching to get outside to use the canvases, just to do something with a paint brush and I'm stuck in the office trying to set up the accounts software for the studios. We (me and Claire) give up around 4.00 and I've just got time to rush out and do a quick sketch. I start walking around aimlessly, trying to find a subject. I get taken by these blue clouds bobbing along the hills on the south side of the city and suddenly I've got to get a clear view of them. Victoria park and the front of the Crescent is a waste of time with trees and architecture constantly getting in the way. I haven't time or the energy to climb higher so I end up in the allotments. A bit of panic starts to get hold as the clouds continue to move in the opposite direction to the sun and I'm in danger of missing the moment, but I set up quickly and slap some paint on. Shoulder muscles ease slightly (without the necessity of pummeling by scary woman with greasy hands) when I get the sky just about right before the colours change (those clouds are so blue). I then turn my attention to the bottom of the painting and the dark brown smudge that is the allotments. A shed - I know, I'll put a shed in. All sounds good, but whatever I do it's not coming out right. I  try highlights, pencil, reworking the angles, but to no avail. I'm just about resigning myself to the failure, when someone lights a bonfire. Praise be, just what the painting needed. Aaaaaand ..... relaxxxxx. 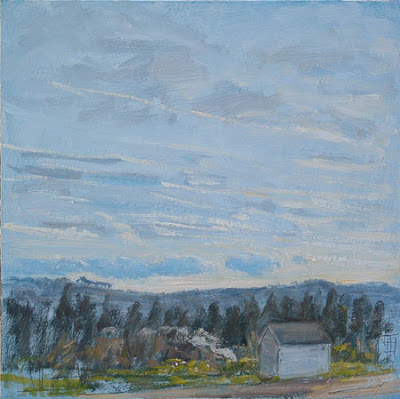 Not quite the breakthrough I was looking for, but there's always next week.
* okay ask. It wasn't on my list of 100 things to do before I die (henceforth to be known as my bucket list after the movie and because, yes I can take it, it's a much better name), but I was given a voucher so on it went, just so I could cross it off and because it sounded interesting.
I'll keep it brief:
Massage
Floatation (cos that's how they spelt it in the brochure)
It was all at this place called the relaxation centre and I'm still not convinced. The masseur seemed particularly disappointed when I said I didn't feel any different after the event.
** This painting originally came from a blog free period, so for posterity I wrote down the words before I covered them up:
"17/04/08  I started this painting a couple of months ago and the angle of the sun makes the shadows a lie, but that's okay.
3 schoolgirls come over and ask to be in the painting. I point out that they are no longer in my view. They decide that they'd only end up as indistinguishable blobs anyway. They make me laugh with their questions:
'Are you rich?'
'Do you have a girlfriend?'
They swear casually, but I don't say anything - I just hope that my own daughter doesn't feel the need to talk like that."
Posted by Ben Hughes Art at 03:53 1 comment: 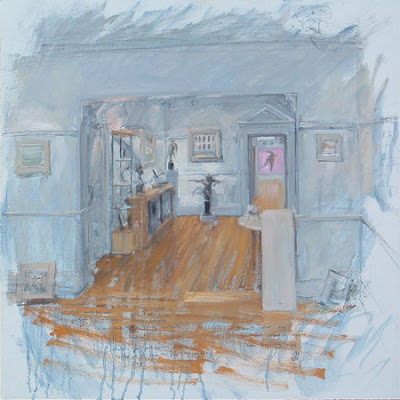 08/02/2009
I'm standing, painting, in the window of an art gallery which is holding an exhibition of my work - It's like I am art! ... or perhaps a performing monkey.
Still it could be worse - I've got my back to the window so I can't see or hear anyone outside. That said, they can see what I'm painting, so the pressure's on to make it half way decent. I have occasional cause to regret my decision to paint the interior of the gallery itself (oo er - painter becomes art & gallery becomes painting - derderdoodooderderdoodoo - twilight zone or what?)
3 things better that being outdoors: 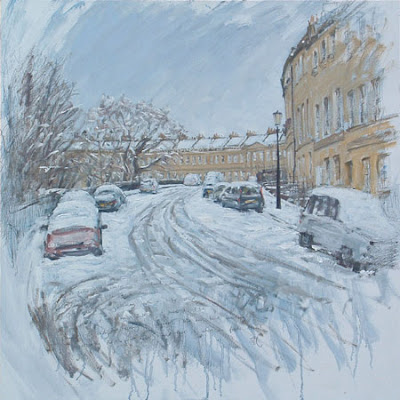 11/02/2009
I start by finishing the Lansdown painting - it doesn't take long and not much happens. lol makes me promise to show her the finished painting - I agree, but don't warn her that I'm going to be writing all over it. 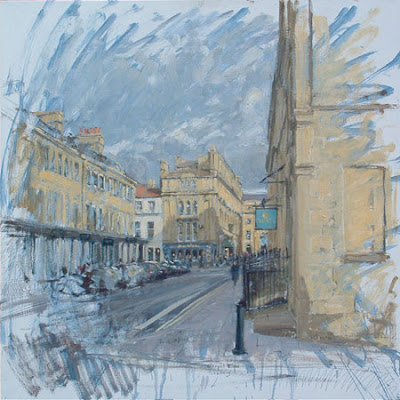 Afternoon and there's a bit of sun, so I storm into town determined to finish the painting of Quiet Street (or is it John Street?). The shadows aren't quite as they were when I started the thing back in November, but I make a few adjustments and it's all good.
I should have a big tourist information sign on my head because I get a long stream of interruptions:
Only other conversation of note:
Young woman: "What's your name?"
Me: "Ben, Ben Hughes."
YW: "I did a project on you."
Me: "...."
I'm embarrassed, she's embarrassed, I smile, she laughs and I think we're okay, but before I can actually say anything she's gone.
Posted by Ben Hughes Art at 10:03 2 comments: 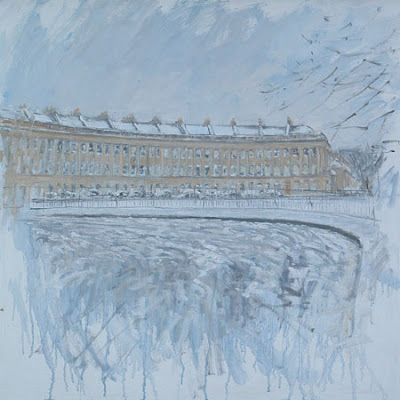 05/02/09
A wise man once told me that the secret of a good snow painting is to paint the sky darker than the snowy ground. The reality varies as the clouds change, but I heed the words of the guru.
The same wise man also said, "look and look again." I pay this less attention as I get lost in the windows  - so many windows.
I've never seen the park so busy with snowmen and sledgers everywhere. I'm an easy target, but only two snowballs come my way and they are a bit feeble - must be my hard stare.
The snow is already melting and every passing car hastens its demise. The yellow lines start to appear, but I regret my decision to paint them in as it just looks like a load of pee stains in the snow. I try and correct the mistake, but not sure I totally get it right. I put the railings in at the end, but it's tricky to do it without making the snow all dirty and they end up all over the place.
The cold finally defeats me and as I pack up I find someone's car keys revealed by the melting snow. Picking them up I resolve to do the right thing and hand them in at the police station. 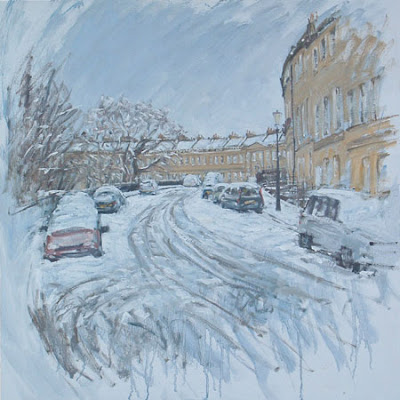 06/02/09
More snow! I schlep into town lugging easel and board only to find that the snow here has already melted. I schlep all the way back to the car, determined to make the most of the weather - I need some altitude. I try my luck with Lansdown Crescent again - it's a bit of a nemesis - but it's still got plenty of white stuff.
4 things that make me smile (or not):
Posted by Ben Hughes Art at 12:35 No comments: 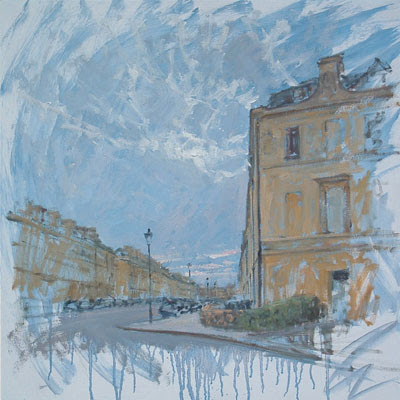 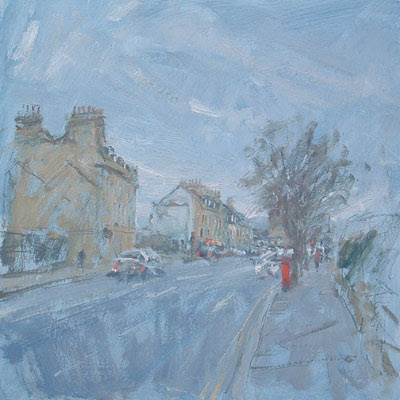 30/01/09
Three fatal errors:
In case you're wondering, to paraphrase the doctor:
"Hot damn, that truly is one ugly leg! Now, quit wasting my time and get out of my office."
Posted by Ben Hughes Art at 05:12 1 comment: