Thursday 27/08/09
I've really got to re read my blogs - what was I thinking? I'm a ninja - I'm an olympic athlete - I'm a boxer!? What? Let's get real - I'm 42 years old, I walk into town, I paint and I tell a funny story (ha ha). That's it.
Back to basics.
There's a bit of sun and I've got the commission painting to finish so I walk into town (see told you) to set up by the abbey. I pass the Griffin Inn - it was a pretty grubby pub, nothing to write home about, but part of me can't help being sorry that it's had the pub makeover. You know the one - it's all polished wood, attractive staff and a high priced food menu now. (That wasn't the funny story - maybe it's coming next.)
I pass the Castle Galleries (boo hiss). I don't think much of it, but I look in the window at these paintings of beautiful people, semi naked and pouting and I think about the artist and I realise, 'he's just selling sex'. I move on to the paintings next to his and think, 'he's selling a story' and the one further on, 'he's just selling a joke'. They've all got a 'thing' that their art is geared around. What am I selling? A memory? An idea? If the answer is just 'a view' then something's wrong.
(okay so that wasn't funny either, but here it comes I can feel it ...)
I set up in the same position, but things have changed - the sun isn't getting up as high in the sky anymore and much of the foreground is in shadow (I'll have to work round that) and someone's gone and put flowers in hanging baskets everywhere. Pah. (I say 'someone' when obviously it's the council - grrrr - damn them and their mad council tax spending ways)
I get quite a few people looking at the painting. A chinese lady complements the painting and then says, 'Are you going to put the flowers in? They are so beautiful.' I control my response and don't say, 'No lady, I am NOT going to put the flowers in. Can't you see that my painting doesn't NEED any flowers in it?'
(damn - not funny either. Still, plenty of time left, maybe this is it ...)
More people look and I'm not even going to mention the PB question. The painting comes together and I'm feeling pretty pleased with it. I can't think of anything to write on it apart from the title, 'Waiting'. 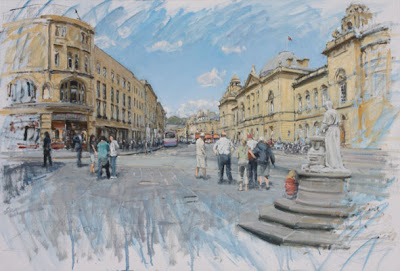 On the way back I'm near the Griffin Inn again and despite their efforts to enhance the area there's a guy with blonde dreadlocks puking in the street. He's bent over, his left hand on his knee propping him up, while he uses the other to keep his long dreads away from the stream of vomit. Nice. (Yes, it is only 2 in the afternoon.) He's got a mate with him who is comforting him with the occasional pat on the back. He obviously needs no interference from me so I walk on by. I can't help but marvel at the particular shade of green.
(Was that the funny bit? Is that all? No wait there's more ...)
(Oh, no there isn't. So much for a funny bit.)
What am I selling?
Posted by Ben Hughes Art at 01:58