Of rooks, deer and shenanigans 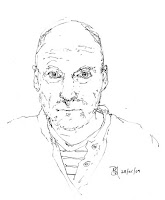 28/05/09
I'm up at Prior Park painting the college. It's half term and there's no one else around. Landscaped gardens sweep down the valley and open out to a fantastic view of the city*. It's not quite the middle of town, but it's definitely not the country and a deer wanders out of the trees to my left. It bounds (as deers do) across the lawn and steps in front of the mansion house before disappearing into the trees on the far side. I guess it was twenty yards away from me at its closest. It's quite unexpected and quite wonderful.
Later and one of the masters comes out of his rooms to water some pot plants. He doesn't say anything to me and I don't say anything back. He and his wife have dinner outside and the chimes of the cutlery and the clinking of the china become my background music. It's a beautiful day.
* I can't post an image of the painting yet as it's a commission and I need to show it to the commissioner first. Sort of a surprise, but not quite. Semi mysterious I know, but you're stuck with the line drawing of old fat head. 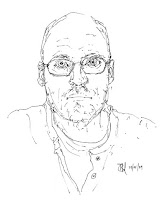 29/05/09
I can't do any drawings on the way to the studios cos I'm picking up the wine for more OPEN STUDIO SHENANIGANS which also means that I don't get much painting done. To make up for it I do some sketching later, on the way to Sainsbury's to pick up some nibbles.
The entrance to the Studios and a lone flip flop reminds me how easy it is to leave a sandal behind in Homebase carpark (a long time ago now, but some things you never forget - probably due to wife and family ridicule on a periodic basis). 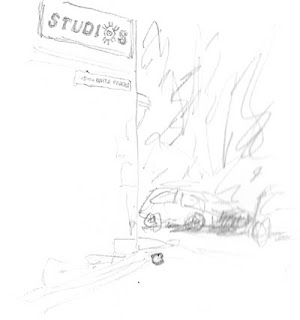 More flowers by the river; more tragedy; mirrored by the man drinking alone on the other side. 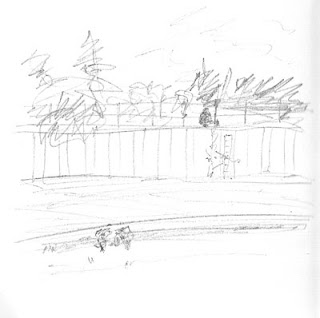 I walk on to find myself walking almost in synch with two muscle and tattoo clad topless youths. Their trousers miraculously stay up despite starting underneath their buttocks. I feel slightly intimidated, but keep pace with them for a while before stopping to draw a big old rook I saw this morning. I know it's a rook because it had a big grey beak and feathery trousers and Claire told me. The drawing doesn't work because although I remember the trousers and the beak it turns out I can't remember anything else. That is apart from the fact that the beak could peck your eyes out. 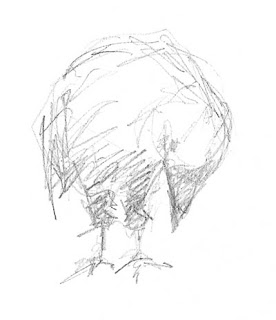 I get to Sainsbury's and there's a car alarm blaring away with a small child peering out from the rear window. I meet someone I know and I don't do any more drawings.
Posted by Ben Hughes Art at 11:27

Email ThisBlogThis!Share to TwitterShare to FacebookShare to Pinterest
Labels: sketches